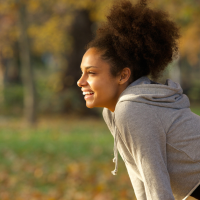 While daily life must continue following the death of a loved one, the emotions associated with grief can feel like an immense weight that is impossible to shake. Fortunately, for many experiencing grief and depression, they are discovering an incredibly powerful tool for relief from an unlikely activity—exercise.

“Does the gym attract happy people or are people happy because they go to the gym?”

It sounds counterintuitive—exercising while in grief? Indeed, you'll likely never see someone in a depressed state on the treadmill or swimming laps. If these two activities seem to be at odds, that's because scientifically, they are.

Even though exercise is not a magic bullet to help the grieving completely rebound, the effect it has on one's brain chemistry is undeniable. When one partakes in a particular duration and intensity of exercise, the brain is triggered to release several chemicals, including endorphins. Endorphins are incredible mood-boosting chemicals designed to relieve discomfort. While these endorphins were largely designed to help our ancient ancestors outrun predators, today, they can make us feel physically and emotionally amazing after a great workout.

"Exercise is a very good and positive tool that people can use while grieving, mainly because it triggers that release of neurotransmitters and the release of endorphins," reported Sharon Stallard , a trained bereavement counselor.

At a hulking 6'6", comedian Gary Gulman has been making audiences laugh all over the world for nearly 30 years. Despite inspiring the happiness of millions, Gary had a dark secret he hid for years—he was suffering from deep depression.

For decades, Gary checked into a variety of mental health programs with mixed results. Exercise, however, has been one of his saving graces.

During a podcast episode with fellow comedian Pete Holmes , Gary said that, when he was feeling down, there was one question he would ask himself:

"Have I exercised today? Usually the answer is, 'no, I haven't exercised today.' 'Alright, see how you feel after you exercise.' And at this point, thank God, after I exercise, oh, that was it. ... every time for a couple of years now...and it can be as little as 18 minutes. I've never gone under 18 minutes— it's probably 10. But you don't want to tell me that—the guy who just exercises 10 minutes a day...and he's happy?"

If you've ever heard the NPR news quiz show, "Wait, Wait, Don't Tell Me," you've likely heard the unmistakably gruff comedic elbow-jabs of the legendary Paula Poundstone. Suffering from happiness issues of her own, Poundstone researched and wrote a book The Totally Unscientific Study of the Search for Human Happiness. Her research consisted of her experimenting with the various age-old happiness avenues and seeing which fostered the greatest results. Experiments varied from test driving sports cars to volunteering with charitable organizations.

During an interview with Parade , Poundstone expounded one of her findings—the impact exercise had on the resilence of her happiness in the face of grief.

Interviewer: "...You write that exercise made you feel more resilient. Again, that's not something we necessarily think of when it comes to being happy..."

Poundstone: "Yeah, it definitely was. I do think it provided a better shield than most things. If some of the things that happened during that stretch (of regular exercise) had happened during the stretch of another (happiness experiment)—like my friend Martha dying...If Martha had died while I was driving a Lamborghini (one of Poundstones' happiness experiments), it would have been a totally different experience...because it's worthless. It comes with too much reflection... It's a can of worms. And push-ups aren't."

How Much Exercise is Necessary?

You may feel that you don't possess the time to exercise enough to experience the intended results. According to a 2017 study by Black Dog Institute , as little as one hour a week of exercise was shown to reduce the intensity of the symptoms of depression. Divided over the course of the week, that's less than 10 minutes a day.

For those experiencing grief who would like to give the mood-enhancing effects of exercise a shot, they should know that most forms of physical activity can be considered exercise. Many of us imagine sweating on a treadmill or lifting weights, but exercise can be achieved in other more enjoyable ways. Going for a walk. Dancing. Skipping rope. Swimming at a leisurely pace. To increase the chances of adopting a habit of regular exercise, it is vital to find a form of exercise you actually enjoy and will look forward to performing.

● As few as 10 minutes a day may be necessary

● Exercise may make you more resilient against grief

● Exercise can take on many enjoyable forms

The Role of a Hospice Chaplain

What is a POLST Form & How Does It Differ From An Advance Directive?

Many cannot voice their preferences. Enter the POLST form.

Visiting Loved Ones With Alzheimer’s or Dementia: Do’s & Don’ts